In an article at the Christian Post, Chris Witt notes how “Several years ago, TIME magazine ran an article titled, ‘Why Kids Who Believe in Something Are Happier and Healthier,’ in which they found that many kids today feel that their worth is directly tied to ability and accomplishment. But actually, the article countered, the ‘single most powerful protection against depression and suffering’ is spirituality. And when that spirituality is directly tied to nature – as in a camp setting – kids experience a greater sense of connectedness.”[i]

Witt goes on to explain how the isolation and the stresses of the Covid-19 pandemic has had a detrimental impact on kid’s mental health and the faster our youth can return to normal stabilizing activities, the better.

This is especially true for the abused children that experience healing therapy camps at Whispering Ponies Ranch.

You slink out of bed in the morning in a sleepy but otherwise perfectly fine mood, brewing yourself a classic, American cup-o-joe like you normally do. Sitting down to your computer or television, you begin a quick surf through channels or online media while you blink the sleep out of your eyes. Initially intending nothing more than a casual check-in with the outside world before you report to work, a headline that you can’t ignore blasts its way across your screen, bombarding your senses and waking you up in the worst way: “Sex Trafficking Claims Younger Victims Every Day—Toddlers Are Common Among Victims.” The subtitle is equally disturbing: “Survival Rate Narrows Daily; Window to Find Missing Persons Now Only Eight Days.” You’re one of those who cares too much to look away, so despite your revulsion and the temptation to frolic off to more pleasant news, you read on. The article proceeds to reveal the shocking details and statistics of the defenseless souls whose earthly lives are irreparably damaged by this sick, twisted, and demoralizing epidemic. Solemnly, you set your mug down, shake your head, and silently pray.

Jesus, what is the world coming to?… This problem is so far out of my league. What can I do? I feel powerless to help!

Many of us have been there.

Many of us have felt helpless.

And the stories keep mounting…

Most people simply don’t know what to do when we hear that 75 percent of all trafficked children are being lured online—technology that’s being unsuspectingly handed over to younger children by their parents or guardians every year. We feel overwhelmed upon hearing that 88 percent of all child runaways in the United States were in social services or foster care when they disappeared. Our hearts are further broken when we hear that one out of every seven runaways on our land-of-the-free soil are sex trafficked, and that they, themselves, are forced against their will to assist in the recruitment of other children they know in the foster care system.[1] Then we learn that many of these foster kids are mislabeled “as prostitutes” because their “youth is often hidden under layers of makeup, provocative clothing and attitude,” and they’re “often never reported as missing” after they’ve been forced into commercial sexual exploitation.[2]

And of course, for those of us who are drawn to click a few more exposés into the subject, there are details that an article of this nature could never mention to a mainstream audience such as ours. The horror of what happens to these children doesn’t leave the mind… It stays with you like a bad dream forever.

It’s right about there we sometimes feel more tempted than ever to pretend we don’t know it’s happening because the numbers are so vast and the facts are so disturbing. The idea that we would be called upon to respond initially sounds as insurmountable as solving world hunger or global warming.

What if I were to tell you that there was a way you could measurably help these beautiful children without ever leaving the comfort of your living room or home office?

Whispering Ponies Ranch (WPR) is the charity of SkyWatch TV stationed on a 280-acre campground facility where kids rescued from sex trafficking and other abuse come to be restored. We are also a part of a larger partnership where some—like our friend Jaco Booyens, who works with FBI and other law enforcement personnel—write funding-materials for appropriation bills that were approved by Donald Trump’s administration. (An example was Trump signing the Frederick Douglass Trafficking Victims Prevention and Protection Reauthorization Act, authorizing $430 million for investigations and interventions into this horrendous slavery scourge.[3] This paramount gesture of our US government was, in part, a result of the ministries and personalities WPR is currently, directly partnering with).

Our central sister-ministries, Royal Family Kids Camp (RFKC) and Teen Reach, aim to “transform lives and communities by interrupting cycles of neglect, abuse and abandonment of children…by providing an array of programs, all directed toward changing the trajectory of young lives which usually include a combination of academic failure, drug abuse, teen pregnancy, sex trafficking, homelessness, and incarceration.”[4]

After children are rescued from abusive situations or trafficking slavery, WPR and its sister-ministries work in sync to restore and heal these precious youths, assisting in the slow process of putting their lives back together, helping them trust again, showing them how to believe in their value again, and recognizing that within every soul God creates and loves is a purpose and calling larger and more victorious than their abuse.

And, at WPR, we provide all these services at no cost to the children or anybody else including lodging, recreational amenities, expert food services, and qualified staff.

The Trustworthy Plan for Hope:

At our last WPR Donor’s Banquet held during our annual conference in Branson, Missouri, RFKC Founder Wayne Tesch, stood and gave a short, but highly informational, presentation highlighting WPR’s continuing efforts to help these abused kids. Everyone from our staff, to RFKC staff, to the donors, themselves, were encouraged to hear his learned and experienced opinion and update. After telling several humorous and/or tear-jerking testimonies of young lives who have been forever changed by our facilities and programs, he summarized by stating the following:

As president of RFKC, I have seen it all. I have heard countless promises made in the interest of supporting RFKC ministries—some by impulsive individuals who feel momentarily inspired by what we do but who never follow through, and some by well-meaning folks who start off strong but fall away over time when the commitment they’ve made is too grandeur—but we rarely see a Whispering Ponies Ranch.

These people promised us from the beginning to build a facility geared specifically for our kids and counselors, involving the use of miniature therapy horses to help pull these children out of the emotional turmoil they’re stuck in, and it was the grandest promise we had heard yet. Normally, I would run like the wind from anyone I didn’t already know telling me they would partner with us in such elaborate and lavish ways, right? So when I heard what these people were offering to do, for a moment I wondered if it would be another disappointment. Nevertheless, I agreed to meet with the chief staff of WPR and hear them out. Something in my gut stirred and told me that these individuals could be trusted; that these individuals meant business and would deliver on what they said they would do. Folks, I am here to tell you today that this ministry is like few upon the earth.

Everything they said they would build, everything they said they would accommodate, has been built and executed exactly as they said it would be, and in record timing. In all my life, I have never seen a promise followed through with such speed, excellence, and integrity. You could put your money into a lot of places—many of which I’m sure God would bless you for—but not every ministry you give money to is going to be wise with your investment and show the level of stewardship as WPR. If you only remember one thing that I’ve said today, let it be this: You CANNOT go wrong financially supporting Whispering Ponies Ranch. I mean that, wholeheartedly.[5]

As President Tesch said, we are a reliable, solid, trustworthy ministry for these children. We have never failed on a single promise, and we don’t plan to start now.

Please consider helping this unique, life-changing ministry that is seeing children saved and healed from human trafficking and other abuses and pray about partnering with us to continue the work God is doing on this land. You can join us by becoming a member of the VIP Founders Group or by Sponsoring a Pony.

To sponsor a pony and/or to join the VIP Founders Group, please visit these two websites: 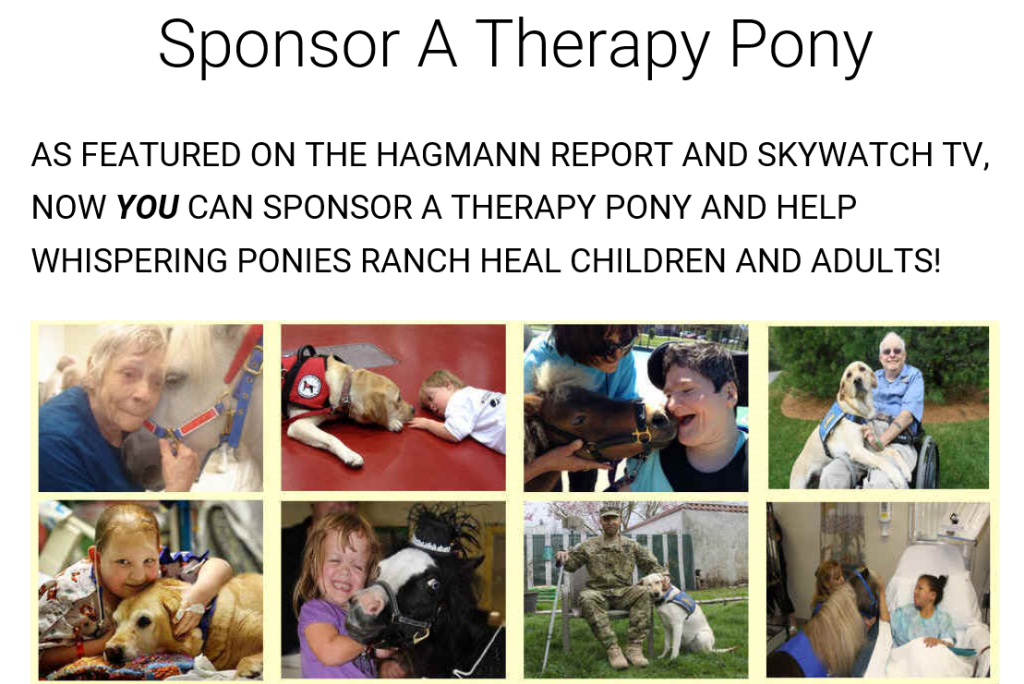